On a recent trip to Chicago, I had the opportunity to try Green Line by Goose Island Brewing. This American style pale ale brewed with a mixture of four different types of hops is a uniquely smooth and very drinkable transition beer. It is light in color and flavor, but has a nice mouthfeel that makes it an enjoyable summer beer. In addition to that, for every pint you buy, Goose Island will donate money to the
Posted by Nate Shultz at 10:21 AM No comments:

Some Brewing Facts for Your Enjoyment

These numbers to me are amazing. It is refreshing to see that despite the economy being in the crapper we are seeing a consistent and rapid climb of breweries across the country! 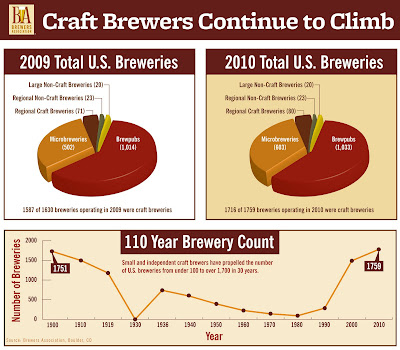 This next article was posted on the Brewer's Association website:

An American craft brewer is small, independent and traditional.

Small: Annual production of 6 million barrels of beer or less. Beer production is attributed to a brewer according to the rules of alternating proprietorships. Flavored malt beverages are not considered beer for purposes of this definition.
Independent: Less than 25% of the craft brewery is owned or controlled (or equivalent economic interest) by an alcoholic beverage industry member who is not themselves a craft brewer.
Traditional: A brewer who has either an all malt flagship (the beer which represents the greatest volume among that brewers brands) or has at least 50% of its volume in either all malt beers or in beers which use adjuncts to enhance rather than lighten flavor.
The following are some concepts related to craft beer and craft brewers:
On top of these facts, in a recent article on the Brewer's Association website, there are 725 breweries in planning stages across the country!! A quote from one of this nation's greatest presidents sums up our whole situation and how it can be fixed by beer:

"I am a firm believer in the people. If given the truth, they can be depended upon to meet any national crisis. The great point is to bring them the real facts, and beer."
-Abraham Lincoln


FYI: for any future comments or questions, feel free to email me at indiana.brewhaus@gmail.com.

Over the past few years, Indiana has seen a resurgence in the brewing community. This is definitely NOT a new trend by any means. After doing a little research for an upcoming meeting, I came across a graph that showed the rich Brewing History of Indiana. As it turns out, Indiana has a brewing history that dates back to the 1830s. As with many states, it has seen its share of ups and downs. At one point in the state's history, we had as many as 106 breweries in the state. Prohibition and a change in the American palette put an end to many Hoosier breweries. By 1975 only two were operating in the state of Indiana.
Today we are fortunate to have 37 breweries and brewpubs operating in the state of Indiana with more opening up in the coming months. This is truly an exciting time to be a Hoosier beer lover.

Check out the Podcast!

We are featured here!!